The Aleut region is part of the Ring of Fire, stretching over a thousand miles into the Bering Sea and the Pacific Ocean. The Aleutians are the birthplace of some of the wildest storms known to man with fierce winds and high waves continually challenging those who live, work, and travel in the region. Coastlines are often rugged with steep cliffs and narrow, rocky beaches typically lining the islands. Though small in landmass, the islands’ treacherous shores nevertheless include about one-third of Alaska’s coastline. Bears, birds, foxes, and caribou make this unforgettable land their home. And in Sand Point, buffalo are a common sight.

Today, the region’s pretty villages are shrinking in population as residents migrate out of the region in search of jobs, education, and opportunity. Despite this challenge, the resiliency and adaptability of the people and their connection to the community remain. Sharing is a part of the Aleut indigenous value system and the people strive to maintain that value within the modern world and see it extended to Aleuts now living across the globe. 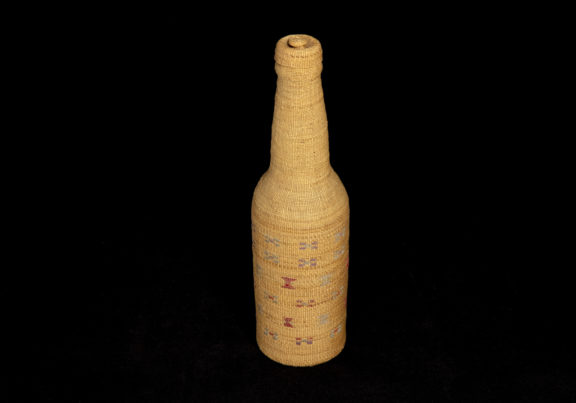 Bottle covered with woven Aleut grass on display in the ANCSA Exhibit at the Morris Thompson Cultural and Visitors Center.

No one really knows how long Aleut basket weaving has been practiced. The Aleuts have lived in the Aleutian Islands for 10,000-12,000 years. The Museum of the Aleutians in Unalaska has a beautifully woven fragment of an Aleut basket that has been carbon dated to 1,000 years old.

Aleut baskets, called Umgachx (basket) in Unangam Tunuu, were an essential part of life for the Aleuts in that they were used in daily living. For example, a large (12” x 12” or larger) tightly woven basket was used for cooking by filling it with water and placing a hot rock inside. Baskets with handles were used for gathering berries or shellfish. These baskets had an open weave, which allowed sand and dirt to filter through while washing the berries or shellfish in the creek or ocean. Other baskets were used for gathering eggs, storing personal items, herbs, etc.

Baskets were woven by the women and young girls were taught how to make them before marriage. Elmus Mollis, beach grass, or wild rye grass were the main traditional materials used for weaving baskets, mats, bags, burial mats, room dividers, floor coverings, baby carriers, and seat covers for kayaks. Other plant materials were used to decorate baskets and mats, including gut, sinew, feathers and quills, strips of sea lion esophagus, dyes from plants and minerals, caribou hair, birch bark, and sea mammal fur.

There are three known variations of Aleut basketry, which are named for the islands where they originated. They are the Attu, Atka, and Unalaska styles. Attu baskets are the finest woven of the three styles and are recognized worldwide for their fineness and perfection in weaving.

Pre-contact, weaving a single basket could take up to a year because baskets were much larger then than today and were used daily. Raffia has replaced rye grass in weaving, mainly because access to rye grass is not always possible. After contact, basket collectors wanted the prized baskets and therefore, they were made much smaller (4” x 5” or smaller).

Some of the first and oldest baskets taken from the Aleutian Islands are in the St. Petersburg Museum in Russia. Aleut baskets can be seen in many museums around America and Europe. Basket weaving is still practiced today but by not too many weavers, as the weaving is tedious and requires much patience. Thankfully, the weaving of Aleut baskets is being revived more and more.

I learned to weave Attu baskets in 1983 and have been teaching in culture camps and other places so that the art of Attu basket weaving doesn’t die like so many other parts of Aleut culture. That is also why I wrote a book titled “Learn to Weave an Attu Basket”. When I learned to weave, there was only a handful of Aleut women who still wove Attu style baskets. Writing my book and teaching how to weave is my contribution to my people, the Unanga, and to others who want to learn how to weave an Attu basket.

For more information about The Aleut Corporation, visit the region’s website.