Early in 2020 Richard and Babes Coleman and I sat drinking coffee in my office as they told me about their years of friendship with esteemed local Alaska Native elder Howard Luke. I knew of Howard as a role model for generations of local kids, especially among the Native community in Fairbanks. He founded Gaaleeya Spirit Camp on his land near Fairbanks and for many years he taught young people there, sharing Athabascan art and language and skills for living on the land. Richard, Babes and I enjoyed looking at pictures of the three friends fishing together in their younger days and of Howard out hunting with his dog. We also leafed through their copy of “My Own Trail,” a book about Howard by Jan Steinbright Jackson.

As we talked about Howard’s life and legacy, Richard shared with me that before Howard passed he gave to Richard the Winchester model 94 .30-30 caliber rifle that he had used for most of his life. The rifle, Richard explained to me, was received by Howard Luke’s stepfather William Titus as a gift at a memorial potlach in honor of Chief Dan Thomas of Nenana. William Titus then passed the rifle on to Howard Luke, who used it as a hunting tool in his subsistence lifestyle for 60 years. Together with the rifle, Howard had given to Richard a beautiful moose-hide case encrusted with traditional Athabascan beadwork. Richard wasn’t sure who made the case.

Today Richard and Babes were offering the Morris Thompson Center a very special opportunity: could we care for and display the rifle and its beaded moose hide case in honor of Howard’s memory? With the story of the rifle still fresh in my mind, I immediately thought of the potlach display in our Elder’s Hall, where we show examples of the traditional gifts given and received at an Interior Alaska Potlach.  Rifles are often given at potlaches, as Howard’s was, and in fact we had a few on display down there – but none with the significant history of this rifle. Richard and Babes liked the idea, too, so we agreed then and there to place Howard’s rifle and case in the Elder’s hall, where it would proudly honor Howard’s memory and educate visitors about the tradition of potlach.

A few months later I had the pleasure of welcoming Richard once more to the center, and together we took a look at how we had arranged the display. I was delighted to see that he approved of the rifle’s new place in our exhibit. We took the picture you see here that day: Howard’s rifle is in the center of the case behind Richard, and its case is directly below it. 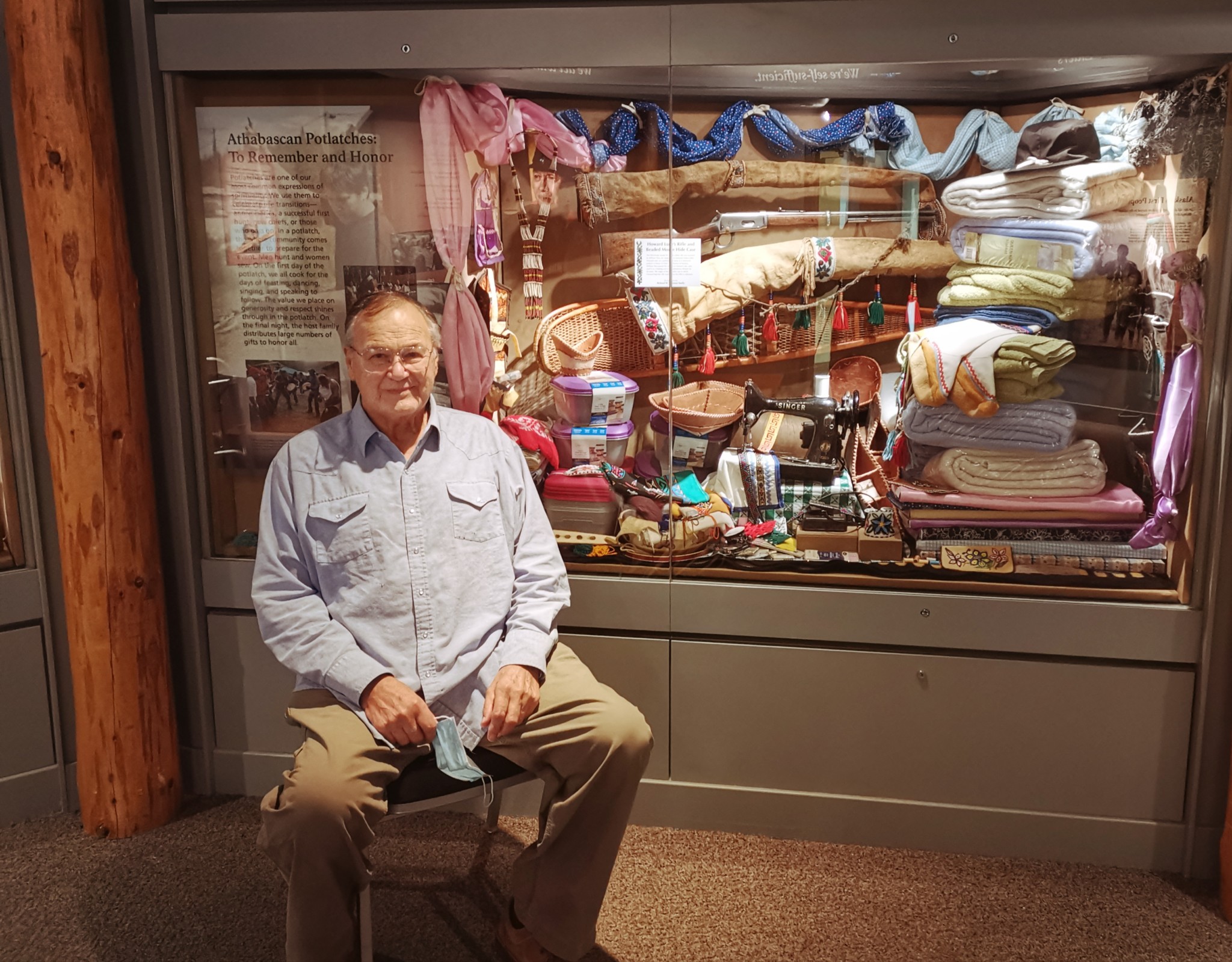 Now, together with the Coleman family, The Morris Thompson Center proudly invites you to come see Howard Luke’s rifle and beaded case. If you would like to learn more about Howard Luke before you visit, I suggest you start with his story in his own words as shared at the Tanana Chiefs Conference “Legacy of Our Elders” project.  Click the embedded link and when the new screen pops up just look for Howard’s name on the list and click it to hear him tell his story. “My Own Trail” is a great resource too. And, local folks: if you find that you can shed any light on who beaded that stunning rifle case, please do let us know!

Would you like to support the Morris Thompson Center’s work to make educational exhibits about the peoples, lifeways, and lands of Interior Alaska available to the public at no charge? If so, please click here to quickly and easily make your gift of any amount.