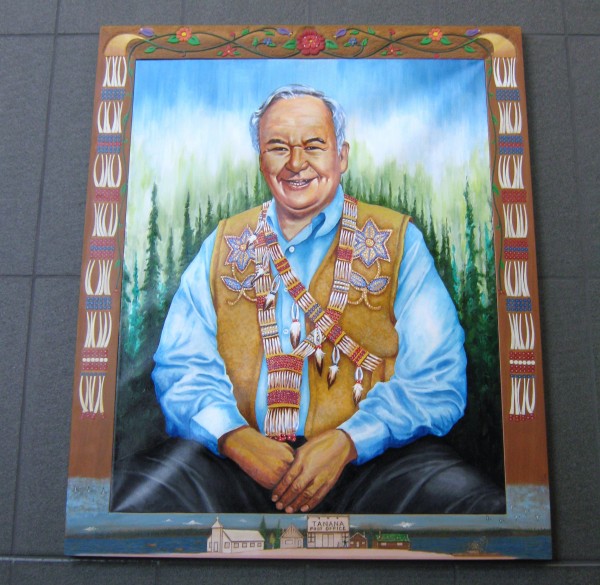 Morris’ family and friends gathered at an AFN reception in October 2010 to see the unveiling of a portrait of the Center’s namesake. Athabascan artist James Grant, Sr., a nephew of Thompson’s started the oil on canvas portrait in 2008. The 5 ft. by 4 ft. oil on canvas painting was nearly complete when Grant died of cancer in April 2010. The portrait was completed by Yupik artist Moses “Uksuq” Wassilie, a favorite artist of Thompson who had also painted a portrait of Morris’ wife Thelma.

Completion of the hand-carved cedar frame also has a familial connection. James Grant’s brother, Jay Schrock, is an accomplished wood carver who often worked side-by-side with Grant on his art projects. Schrock completed the frame based on his brother’s original plans. Hand-carved flowers representative of Athabascan beadwork, a traditional Chief’s necklace, and a painted scene from Thompson’s hometown of Tanana adorn the cedar frame.

Morris’ daughter Nicole attending the unveiling and offered these thoughts.  “I’ve heard stories in my life about my father. The one that sticks out the most was when he was a little boy. Kids would come by and ask him if he wanted to go play outside, and he’d say, ‘No, I’m going to read books because I’m going to be a big man some day.’ That [story] is my favorite. His perseverance, humor, work ethic, and his love for life is his legacy.”