Ahtna, Incorporated is based in Glennallen, Alaska and owned by more than 2,100 shareholders, the majority of whom are of Ahtna Athabascan descent. The traditional homelands of the Ahtna people was approximately 26 million acres, or about the size of the state of Ohio. The Ahtna region, located in the south-central interior of Alaska, encompasses the entire Copper River Basin and is nestled between two national parks. Ahtna, Inc. is the only ANCSA region in which its villages are accessible via the road system. 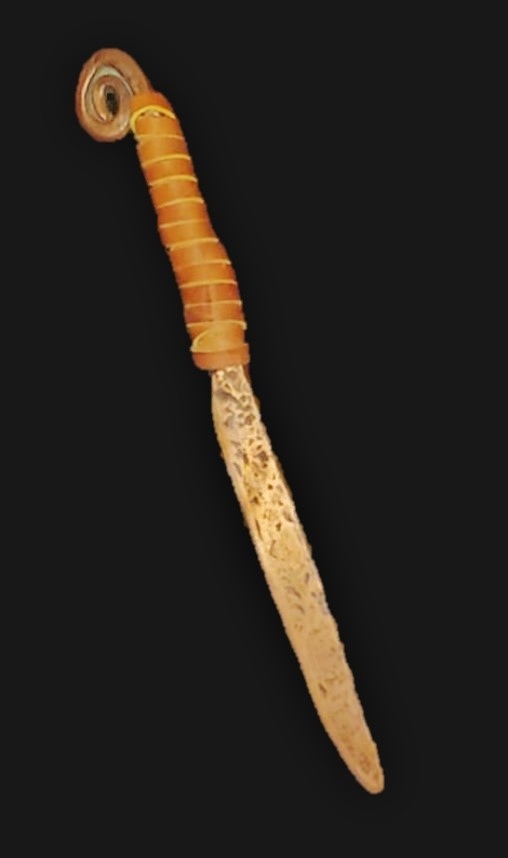 Ahtna, Inc. is well known for their copper.

Ahtna shareholder Ms. Faye Ewan accepted this copper knife on behalf of the Ahtna people at the 47th Annual meeting of the Alaska Anthropological Association in Fairbanks, Alaska in February 2020.
On display in the Ahtna Intertribal Resource Commission conference room.

The Ahtna have always been associated with copper.  In the dialect of the Lower Ahtna, copper is called tsedi, “that which is hammered” while Upper Ahtna call copper tsetsaan, “rock excrement.”  Within the Copper River Basin particularly rich deposits of copper are located within a 75-mile arch stretching between the Kotsina and Chitistone rivers (Mendenhall and Schrader 1903:16).  There are 20 Ahtna place names that incorporate the word for copper and 13 of those are located in the Chitina River drainage.

In the Ahtna tradition, copper is associated with the supernatural and with wealth; it is considered pure and incorruptible with the capacity for endurance, an attribute highly valued in Ahtna culture.

Archaeologists think the Ahtna began working copper between 1,000 and 500 years ago.  Copper nuggets could be picked up off the ground and worked into various objects including arrowheads, knives, awls, fingerings, and earrings through a process of heating and pounding or cold hammering (Workman 1976; Cooper 2012).

Raw copper and finished products were widely traded throughout eastern Alaska, so it is not surprising that Europeans learned of the region’s copper deposits early on in their contact with Alaska Natives.  The Ahtna were so strongly associated with copper in the minds of the Tlingit that they did not refer to the Ahtna as gunanaa (“strangers” or “strange clan”), as they did all other Athabascans, but as Ikkáa Kwaan or “diggers of copper” (Grinev 2005:21).

Copper was extremely desirable not only for making tools and weapons but also as a sign of social status.

Source:
Ahtna: The People and Their History
netseh dae’ tkughit’e’
“before us it was like this”
Simeone, William E., Ph.D.
Published by Ahtna, Incorporated, 2018
Available for purchase at www.ahtna.com/book

For more information about Ahtna, Inc., visit the region’s website.